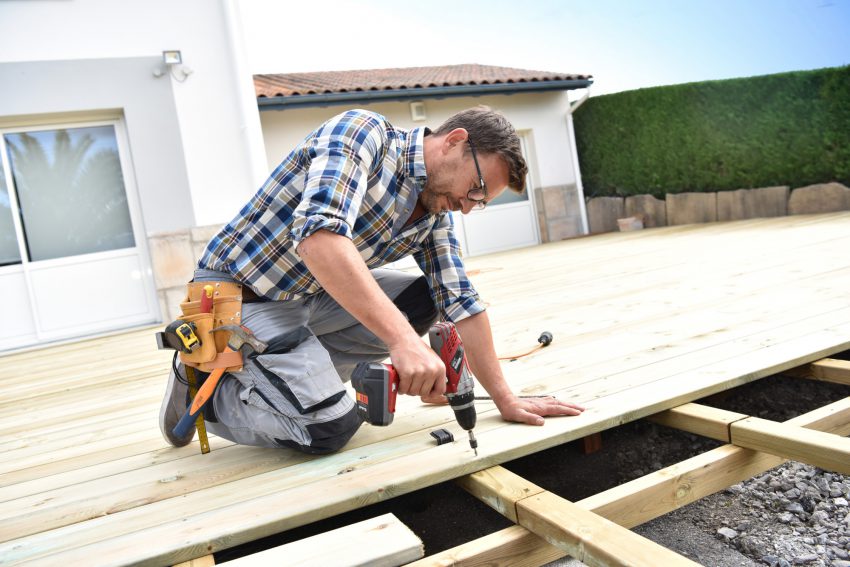 Putting your deck together isn’t as simple as it looks.

From the beginning to the end there are tons of mistakes that can be made.

Even something as simple as building a deck frame can pose major problems for the ambitious DIYer.

So, why not find out what you might be doing wrong before you even buy your materials? Read on for some of the most common mistakes made when building a deck.

1. Not Getting the Right Permits

Building a deck can require permitting depending on your jurisdiction.

If that’s the case then you may be in big trouble if you just dive right in and start building. As a general rule, any deck which is built more than 30″ off the ground requires a permit.

That’s only a general rule, however, and you’ll need to check the regulations in your area. That includes state, county, and even city ordinances.

Make sure to look it up before you begin building your deck or you may end up with a hefty fine instead of a great deck.

Many people try to cut corners when they’re building a deck.

And it’s an understandable mistake for the most part. Most of us naturally want to save money and materials make up a large portion of a deck’s cost when it’s installed.

Unfortunately, cheap materials don’t last nearly as long as the good stuff. If you have to regularly replace the boards which make up the surface of the deck, for instance, you’re probably looking at a much higher cost in the long run.

Even worse, some people choose to go cheap on the structural components of the deck. A frame that fails due to the wrong materials is more than an inconvenience or an eyesore: it’s a downright hazard.

Don’t go cheap on materials. If you’re looking at too high of a cost then you may want to shelve the plans until you have a little more money saved up.

3. Not Going Deep Enough On Posts

When you’re setting the posts that support your deck in the ground it’s tempting to not place them deep enough.

Even worse, some people will use “free-floating” supports. That’s a horrible idea, even with the weight of the deck bearing down on the support posts you’re looking at a lot of shifting and possible warping as time goes on.

The best practice is to make sure you dig down posts at least 12″ into the soil. In areas with heavy frost you may have to dig deeper: the post should be placed below the frost line.

There’s another consideration: the soil needs to be firm enough to hold the posts as well. If the soil is disturbed and loose then you’ll have to find a way to pack it down tightly enough to support the beam.

Supports become more essential the higher the floor of the deck is. Digging them down is a pain but it’ll be well worth it in the long run.

If there’s one thing that DIYers often get wrong, it’s beginning to build their deck without a firm plan. Before you even think about purchasing the materials needed to build your deck you need to make sure that everything is in order.

That means knowing the size, where the joists will be, how many posts are needed to support the deck, the rise and run of the stairs, and basically everything that goes into building the deck.

In many cases, it’s best to seek out someone with extensive knowledge to draft the plans you need. They’ll also be able to make sure that the end result is up-to-code so that you don’t run into issues in the future.

Guard rails are a necessary feature for any deck which is placed significantly above the ground.

A handrail on stairs, for instance, has to be continuous. It’s not nearly as pretty as placing regular posts along the length of the stairs but it’s required for safety and legal purposes.

Make sure that you don’t sacrifice safety for aesthetics.

A common mistake when people are getting the materials together for their decks is to use improper fasteners.

While most people will have the sense to use rust-resistant connectors they may not pay as much attention to the screws and nails which are placed in them.

Make sure that all of these are also made of galvanized steel or another rust-resistant material. The reaction between ambient moisture and the tannins in the wood can cause these vital components to fail quickly if they’re not resistant to the elements.

While it’s not a structural mess, many people will find that their decks develop black stains. If it’s wet during construction or even just humid, they may begin to occur before the deck is even completed.

Get It Done Right With a Structural Engineer

Many people make mistakes when they’re constructing a deck. Whether it’s not getting permits, not keeping up to code, or basic mistakes in building a deck frame – it’s not an easy task.

For those who want a great deck, there’s only one real solution. The professional kind.

If you’re looking to find an excellent design to follow then look no further. Why not start looking for a professional proposal today?